For most of the NAFTA era, China remained in the background of Mexico’s trade relationships as attention was focused on North America. In recent years, however, here at Mexico Business Blog HQ, we have noticed two things related to China. The first is that in our frequent discussions with industrial equipment distributors in Mexico, we find that now some of them represent Chinese product manufacturers, when years ago this was rare at best. Second, in past decades few Chinese companies could be seen exhibiting at Mexican industrial trade shows, and now the Chinese presence at these events is substantial and growing. These circumstantial observations suggest that Mexico’s trade relationship with China has heated up in recent years, and a quick look at the numbers backs this up.

The first thing we notice when graphing Mexico-China trade over the past 10 years (Figure 1) is that Mexico imports way more from China than it exports to the Asian behemoth. Certainly Mexico is not alone in this regard as its NAFTA partners Canada and the USA also post substantial annual deficits in merchandise trade with China (NOTE: Figures 1 and 2 here include extractive products such as oil and minerals in Mexico’s exports). Also, the growth trend is clear: Imports into Mexico from China rose approximately 274% from 2005 to 2014. The disparate volumes represented in Figure 1, however, obscure a different growth trend: Mexico’s exports to China actually posted even higher relative growth over the same period, at 427%. This can be observed more clearly when Mexico’s exports to China are isolated, as in Figure 2.

NOTE: The data used in these tables can be found here. 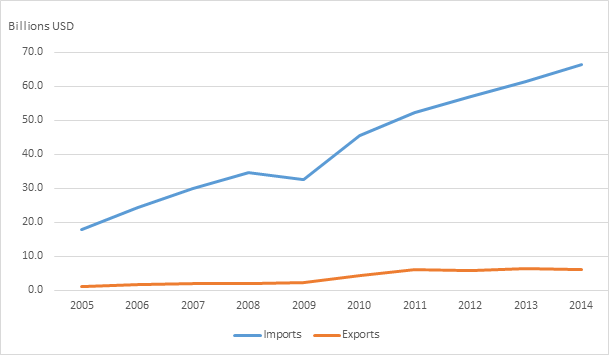 The closer look at Mexican exports to China in Figure 2 shows a major surge from 2009 to 2011 — interestingly, during the worst period of the “Great Recession”. Certainly a jump in crude oil shipments to China from zero in 2009 to US$1.3 billion in 2011 played a hand in the steep upturn, although minerals and automotive exports to China also rose sharply during the same period. We can see as well that once Mexican exports to China leapt from about US$2 billion to about US$6 billion annually from 2009 to 2011, since that time they have remained relatively stable around the US$6 billion level. 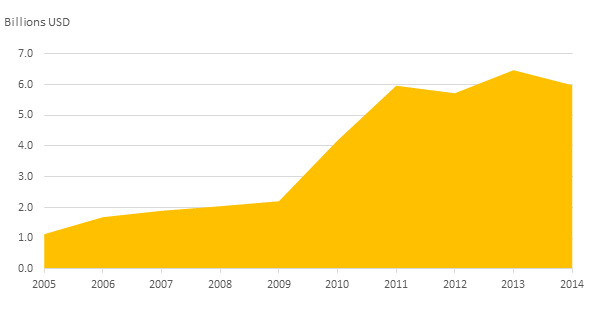 Without doing more in-depth research, we do not know what prompted the jump in Mexican exports to China beginning in 2010 (We would like to conduct this research but we have clients waiting for their reports so we can’t keep spending our time on fun stuff). What we do know, however, is that Mexico’s current President Enrique Peña Nieto has made a point of pursuing a closer relationship with China since the start of his administration in 2012. Peña and Chinese President Xi Jinping have met several times and announced initiatives to boost economic ties, but the process has not been without missteps. A major Chinese-backed commercial and residential development near Cancun called Dragon Mart, for example, faced stiff local opposition and mixed signals from Mexican authorities before finally being blocked by Mexico’s federal environmental protection agency (Profepa) in January 2015. In a higher profile case, the Mexican government awarded a multi-billion-dollar concession to a Chinese-led consortium to build a passenger rail line from the capital to the industrial city of Querétaro, only to rescind the award following a major uproar over perceived conflict of interest. Consternation also has grown in Mexico over allegations that Chinese buyers were working with Mexican drug gangs to export stolen iron ore to China.

Despite the setbacks, Mexico and China continue working toward improved institutional ties. Because Mexican exports to China are still heavy in raw materials, Mexican officials are working to broaden the product categories participating in the country’s China exports. One area that has received particular attention is agriculture. Mexico’s Department of Agriculture (Sagarpa) and the Mexican Berry Exporters Association (Aneberries) have been working with the Chinese Agricultural Product Wholesalers Association (Cawa) to certify Mexican berry producers to supply the Chinese market, and earlier this year the first shipment of raspberries and blackberries from the states of Jalisco and Michoacán departed for China. Similarly, agricultural and food safety officials from both countries have worked hard in recent years to clear the way for direct export of higher value Mexican pork products. Chinese officials have inspected Mexican pork production facilities and collaborated with Mexican officials on regulatory coordination however Mexican pork exporters have not yet received the complete series of permits to be able to begin large scale exports to China.

Considering that Mexico’s imports from China are approximately 10 times the value of their exports to the Asian giant, there is still a long way to go to even begin to reduce the gap. Efforts such as the lengthy authorization processes to open the Chinese market to Mexican pork and berries, however, are a step in the right direction.

2 thoughts on “Mexico determined to grow exports to China”