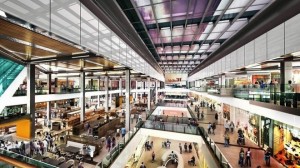 Occasionally when we notice trendy trends here in Mexico, like cupcake stores or compression socks, we apply the handy formula “Los Angeles minus five years” to figure out when they must have been hot in the United States. It’s usually pretty accurate but recently we noticed a trend in Mexico that for once runs absolutely contrary to what is happening in our influential neighbor to the north. Which is this: Shopping malls are booming here, while by all accounts they are in decline as a retail format in the United States.

Our first inkling that there were more malls going up in Mexico City than really necessary was when, to our eternal consternation, the Seguro Social baseball park was unceremoniously bulldozed in 2000 to make way for a completely superfluous shopping center. Heaven knows we spent a lot more time in those bleachers than we ever did in the subsequent mall, but then again if we were a bellwether for Mexican consumer behavior the local Oxxo would be selling Chassagne-Montrachet.   In the succeeding years it seemed like malls were going up on every corner, and, just like with the office buildings and hotels, we really started to wonder when they were going to reach the saturation point. Fancy office and retail space is expensive, so with all this sparkling new commercial real estate going up all over the place, are there really enough customers to provide the return on investment?

A quick look at some industry sources suggest that there are, or at least investors are gambling that there will be. The International Council of Shopping Centers (ICSC) Latin America Market Intelligence Group reported in 2015 that Mexico is home to more shopping malls – 584 – than any other country in Latin America, including Brazil. The same report projects that the number of malls in Mexico will grow by 30% to 760 by 2025! Our own monthly list of very randomly selected investment items includes at least 12 cases of shopping center development since 2012 in projects valued at hundreds of millions of dollars in medium sized cities such as Puebla, Cuernavaca, Campeche and Toluca, in addition to the ever-expanding greater Mexico City area.

In the United States, on the other hand, in recent years the media has been awash in reports on the demise of the once-stalwart suburban shopping mall, not to mention a lot of cool photos of creepy abandoned malls in the midwest. Middle class shoppers are returning to revitalized, trendy downtowns, they say, adding that the advent of on-line shopping is steadily sucking the air out of the brick-and-mortar retail balloon. A raft of consultants and urban planning managers are now working on ways to breathe life into the flagging malls or at least repurpose the real estate as office parks, healthcare complexes and other alternatives.

So why are malls on the skids in the U.S. but enjoying robust growth in Mexico? As usual we don’t know, but after pondering it over a cup of coffee we are willing to posit a couple of possibilities. First, right now internet commerce is booming in the United States but in Mexico the channel continues to struggle against organic obstacles, such as limited credit card access, concerns over fraud and spotty delivery systems for on-line purchases. E-commerce is registering steady growth in Mexico but it will still likely take quite a while before it plays the role in retail that it is has established elsewhere in North America. Beyond the actual transaction methods, the mall also plays an important social role in Mexican urban areas. As the country’s population becomes urbanized and towns grow into cities, the role of the old fashioned town square where communities socialized and young people flirted has shifted to the shopping center. The town square is for somnambulant oldsters and the old fashioned; the mall has multiplex cinemas and modern foreign chain stores. While this may be old hat in Mexico’s largest cities like Guadalajara, Monterrey and Mexico City, their urban sprawl as well as growing medium sized and smaller cities still offer unserved demand that should provide avid new markets for years to come.

The decline may come for Mexico’s shopping mall industry, but it doesn’t appear to be on the horizon at the moment. In a way, it’s a little like the cupcakes and compression socks (or hookah pipes or retro barber shops or what have you); the developers may know that these things have a shelf life as a profitable business, but they’re not about to throw in the towel until the last ice cream cone has been licked sometime later this century.