This morning we launched our day like your average cube monkey — hit the coffee nook for some Joe, busted out a glazed donut (one of them cake jobbies, uh huh), checked the sports scores, and pulled up the latest figures on corn imports.  As a kid we used to think of “corn” as elotes, or corn on the cob.  Working in trade, however, we soon came to learn that the vast majority of corn imported and exported is used as a raw material in the production of animal feed or other food or industrial products.  Looking at data from the Economy Ministry (Secretaría de Economía, or SE) on corn imports into Mexico, we noticed that after a strong surge early in the decade, imports dived in 2013 (see chart below).  We’re not sure what caused the precipitous dip, but we’ll be sure to look into that over an upcoming donut.  In any case, we can see that even though 2015 imports exceeded the previous year by only a small margin, the trend does appear to be on the rise. 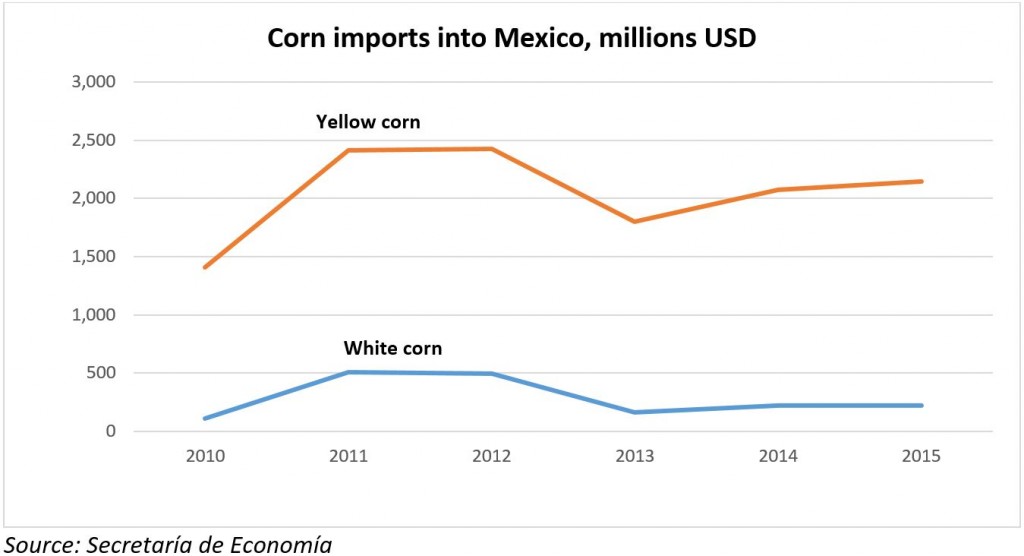 By way of some background, we should mention that Mexico is a major producer of corn, but high demand from various market niches drives substantial imports of the grain as well.  Mexico is estimated to be the world’s fifth largest corn producer, after the United States, China, Brazil and Argentina.  Production is currently in the neighborhood of 23.8 million metric tons (MMT) per year, with 2016 volume projected at approximately 22.6 MMT.  The vast majority of the domestic harvest – about 95% – is white corn for human consumption used primarily for tortillas.  Yellow corn represents less than 5% of total Mexican corn production, partially due to restrictions currently in place on genetically modified organisms (GMOs) in Mexican agriculture.  Yellow corn, however, is a major input in the production of animal feeds, starch, edible oil and other industrial products. As a result, Mexico has to import yellow corn and other feed grains to supply its livestock and starch industries. This provides a ready market for outside corn producers.  With its competitive prices and easy access, the United States is by far the largest source of corn when Mexico needs to supplement its supply.  This not to say, however, that the country is not open to sourcing corn from Canada and other potential exporters if the price and conditions are right.