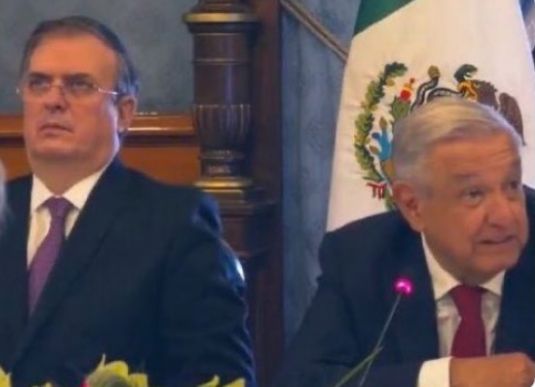 Back in 2003 or so, we attended a meeting of local business executives here in Mexico City and listened while they ranted and wrung their hands over the prospect of Andrés Manuel López Obrador (AMLO) someday becoming president. In our turn to speak we downplayed the alarm level, suggesting that if AMLO were ever to reach the presidency he would turn out to be more pragmatic in pursuing his agenda at the national level. Our opinion was rejected, to say the least, by the meeting attendees. Well, fast forward 18 years or so, and it turns out we were so wrong about AMLO we really ought to be fined and imprisoned for how wrong we were. Since the day he was elected, AMLO burst forth unleashed with the ether bottle in one hand and a scepter in the other, waging unconditional campaigns against the private sector, foreign imperialists, NGOs, science, academia, wind farms, women and a long list of other personal bogeythings. The range of active fronts in his war on sense is vast, and today we would like to offer some comments on the upcoming COP26 climate change conference and how it provides an example of Mexico’s free fall in the opposite direction of sound public policy.

The two six-year presidential administrations that came before the current government – those of Felipe Calderón (2006 – 2012) and Enrique Peña Nieto (2012 – 2018) – are best known for unchecked corruption and the violence unleashed by organized crime. To their credit, however, these governments took a proactive stance with regard to environmental and energy policies, and Mexico publicly committed to ambitious goals for the reduction of greenhouse gases. President Calderón struggled mightily to introduce free-market reforms to the state-controlled energy industry, but his efforts were blocked by Mr. Peña’s Institutional Revolutionary Party (PRI), which then turned around and fast-tracked a similar reform through Congress once Peña himself became president. Among other benefits, the 2013 energy reform set the stage for something of a golden era in renewable energy generation in Mexico, and foreign corporations, often in alliance with local partners, undertook large scale investments to build wind, solar, and other types of clean, or cleaner, energy infrastructure. Everything looked on track for Mexico to enter into a new stage of cheaper, cleaner energy in tandem with the global transition toward reduced carbon emissions and renewable fuels.

Alas, Mexico’s glowing path to a carbon-neutral future came to a screeching halt when Mr. López Obrador took over as president in December 2018. As we have discussed on multiple occasions in this space, AMLO is unflinchingly devoted to his Soviet-era vision of Mexican society built around a state-owned petroleum industry run by a single political party – in this case, the AMLO party (otherwise known as Morena or the 4T). In AMLO’s view, the wind and solar electricity generation plants are enemies of the people in not one but two ways: they are largely foreign financed, and they do not run on fossil fuels. As such he has dedicated much of his energy as president to modifying regulations and introducing legislation to hinder and ultimately halt the operation of renewable energy infrastructure in the country, resulting not only in potentially massive losses to investors but more importantly, in needless environmental degradation, likely electricity shortages and higher costs to consumers in the future.

Throughout the prior two administrations, probably no leading Mexican politician raised the environmental flag higher than current Minister of Foreign Relations Marcelo Ebrard. Traditionally Mexican politicians have given lip service to environmental topics when convenient, but outside of the non-governmental organization (NGO) community, such themes generally did not ignite the passions of the electorate. But Ebrard, an odd political bird from almost any angle by Mexican standards, pushed hard as Mexico City mayor for a variety of green initiatives. Even more unusually by local standards, Ebrard sought the spotlight at climate change events on the global stage, which we interpreted then and now to be part of his long-running strategy to reach the presidential chair. In our own reading of events, Mr. Ebrard planned to run for president in 2012, but ultimately stepped aside to clear the way for AMLO to accept the nomination of a leftist coalition headed by the Democratic Revolution Party (PRD). We surmised at the time that the two leaders had negotiated a private deal for AMLO to help Ebrard reach the presidency further in the future, and we still maintain this suspicion. As things unfolded, AMLO lost again in 2012 and by the time the campaigns ramped up for 2018, Marcelo Ebrard was on the lam in Europe while his adversaries back in Mexico pushed for his prosecution over a poorly constructed metro line built during his mayoralty.

By 2017 Marcelo Ebrard’s presidential aspirations looked grim but true to form, the tenacious tree-hugging former mayor appeared astonishingly by the side of the surging AMLO in the final months of the 2018 presidential campaign. Our suspicions of a pact to rehabilitate Ebrard’s career seemed to be vindicated, and in the first two years of the new government, Marcelo was everywhere, taking credit for shipments of COVID-19 vaccinations, dealing with migrant hordes and shaking hands with foreign dignitaries. Under any other circumstances, the COP26 climate summit in Glasgow at the midway point in the administration would have been a golden opportunity for Minister Ebrard to crown himself heir to the Mexican presidency while showing off his international expertise, relationships and progressive climate politics. But you know, politics and weekends in Las Vegas sometimes look like they’re going to be so great, and then they wreck your life. As world leaders converge for COP26 next week, Mexico has gained attention for pursuing an aggressive campaign to promote fossil fuels and halt the advance of clean energy, and instead of enjoying an international coronation in Glasgow, Mr. Ebrard will be watching the proceedings in his boxers at home in Mexico City.

The Mexican government has acted as if it is somehow chastising the climate summit by sending a delegation only of mid-level functionaries, and Ebrard himself has crabbed publicly that Latin America has been unfairly shortchanged in the disbursement of funds for supporting climate change initiatives. One is well aware, however, that this line comes directly from the president’s office and if Ebrard himself were in charge, he would be attending COP26 personally and making enthusiastic declarations under the hot media lights. The situation is a complete wipeout for him, but at this point Ebrard is probably glad he’s not going, because the very idea that he would have to stand in front of international colleagues and defend AMLO’s moronic, retrograde energy policies quite makes the blood run cold. It would be like the scene in Bertolucci’s “The Last Emperor” in which the boy emperor, soon to lose all power, orders his servant to drink the ink. This time around, Marcelo Ebrard will not be forced to drink the ink in front of his international colleagues and the media, but we can only suspect that he feels like he’s taking a sip of it every time he is obligated to make dismissive comments about efforts to combat climate change at his master’s behest.